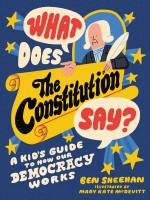 What Does the Constitution Say?

If you've never read the Constitution, let this guidebook help you! Featuring fun facts, cool illustrations, and even hilarious jokes, What Does the Constitution Say? will help you understand how our American government really works.

Written more than 230 years ago, the Constitution can be hard to understand (even for adults). But it also gives you what you need to make our country the best it can be for everyone. What Does the Constitution Say? takes you on a tour of the whole Constitution while explaining what its fancy words really mean. From the Preamble to the 7 Articles to the 27 Amendments (so far), this fun-to-read guide is packed with bite-sized info, historic quotes, and graphics on important topics such as: 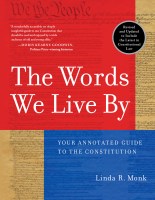 The Words We Live By

by Linda R. Monk
The Words We Live By takes an entertaining and informative look at America’s most important historical document, now with discussions on new rulings on hot button issues such as immigration, gay marriage, gun control, and affirmative action.

In The Words We Live By, Linda Monk probes the idea that the Constitution may seem to offer cut-and-dried answers to questions regarding personal rights, but the interpretations of this hallowed document are nearly infinite. For example, in the debate over gun control, does “the right of the people to bear arms” as stated in the Second Amendment pertain to individual citizens or regulated militias? What do scholars say? Should the Internet be regulated and censored, or does this impinge on the freedom of speech as defined in the First Amendment? These and other issues vary depending on the interpretation of the Constitution.

Through entertaining and informative annotations, The Words We Live By offers a new way of looking at the Constitution. Its pages reflect a critical, respectful and appreciative look at one of history’s greatest documents. The Words We Live By is filled with a rich and engaging historical perspective along with enough surprises and fascinating facts and illustrations to prove that your Constitution is a living — and entertaining — document.

Updated now for the first time, The Words We Live By continues to take an entertaining and informative look at America’s most important historical document, now with discussions on new rulings on hot button issues such as immigration, gay marriage, and affirmative action.

The Thing You Think You Cannot Do

by Gordon Livingston, MD
Fear-of change, of intimacy, of loss, of the unknown-has become a corrosive influence in modern life, eroding our ability to think clearly. Overcoming our fear, says Dr. Gordon Livingston, constitutes the most difficult struggle we face. Dr. Livingston has increasingly found himself prescribing virtues like courage to his patients instead of antidepressants. Now he tells us what we need to do to develop personal virtues in the face of societal and individual fears. He does all this with the crystalline prose and leavening wit that have made him an internationally bestselling author.

by Steve Berry
From celebrated New York Times bestselling author, Steve Berry, comes the latest Cotton Malone adventure, in which the discovery of a lost historical document challenges the global might of the United States.

King Ludwig II of Bavaria was an enigmatic figure who was deposed in 1886, mysteriously drowning three days later.  Eccentric to the point of madness, history tells us that in the years before he died Ludwig engaged in a worldwide search for a new kingdom, one separate, apart, and in lieu of Bavaria.  A place he could retreat into and rule as he wished.  But a question remains:  did he succeed?

Enter Cotton Malone.  After many months, Malone’s protégé, Luke Daniels, has managed to infiltrate a renegade group intent on winning Bavarian independence from Germany.  Daniels has also managed to gain the trust of the prince of Bavaria, a frustrated second son intent on eliminating his brother, the duke, and restoring the Wittelsbach monarchy, only now with him as king.  Everything hinges on a 19th century deed which proves that Ludwig’s long-rumored search bore fruit–legal title to lands that Germany, China, and the United States all now want, only for vastly different reasons.

In a race across Bavaria for clues hidden in Ludwig’s three fairytale castles–Neuschwanstein, Linderhof and Herrenchiemsee–Malone and Daniels battle an ever-growing list of deadly adversaries, all intent on finding the last kingdom.