If anything, 2020 is a new year to dream big! Here, Revolutionary Witchcraft author Sarah Lyons details the importance of dreams in witchcraft and encourages your to let your imagination soar this new year.

There are forces in this world that seek to dominate us against our will. These forces wish to control how we dress, how we look, if we live or die, who we love, how we love them, and if we are allowed to feel love at all. Living in the Disenchanted World can make magic seem impossible and our sphere of influence small.

You may be physically and financially restricted in a thousand different ways, but one thing I hope you never let get shrunk down or confined is your imagination. Our ability to dream a different world is the foundation of magic, and quite frankly, it’s the only hope we have.

In the first issue of Neil Gaiman’s The Sandman series, a bunch of occultists capture Morpheus, the god of dreams, and keep him from the world for years. Without dreams, progress halts, people stop asking for more out of life, and many fall into sad years of dreamless sleep. Looking at the news, it can sometimes feel like someone has captured dreams in our world too. We’ve got big problems, but our imaginations seem just a bit too small to solve them. A carbon tax to fight the death of the world? A clever sign at a protest to keep people from dying? Small steps can be necessary to reach our goals, but sometimes we are sold small steps to keep us from imagining bigger ones. Besides, even if our steps must sometimes be incremental, why can’t our dreams be big?

Dreams are very important in witchcraft. In dreams we enter other worlds, other states of consciousness, and can talk to the living, the dead, and maybe even things that never lived or died. As an activist, you are going to encounter so many people telling you to be more “reasonable” or that your ideas aren’t “realistic.” Sometimes this comes from a place of bad faith, and the person telling you all this wouldn’t want to see your demands met, even if they “reasonably” could be! But, sometimes, you’ll hear the same kind of limited thinking from people who genuinely would like to see your dreams become a reality, but have had their own imaginations so damaged by the Disenchanted World that they honestly can’t imagine a better way of being. They’ve forgotten, or maybe never realized, that dreams and reality have a lot more overlap than we like to think. As witches, it’s important to remember that.

Look around you, and recognize that everything you see was once immaterial, a dream in someone’s head. The chair you’re sitting on, the lamp you’re reading with, the book you have in your hands right now—all this once existed as nothing more than a thought. Then, someone, or a bunch of people, decided to use their power to make the immaterial, material. They did magic through this altering of reality, and even if all they did was make a new chair, they changed the world. The art of dreaming—of dreaming big—and pulling things out of the realm of imagination and into this world is what all good magic is about. If we are going to use magic to take on big problems, we can’t let our dreams be anything other than massive. 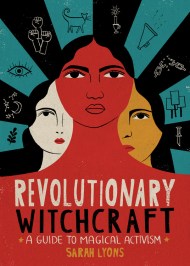 A fiery, inclusive guide for activists and witches alike, Revolutionary Witchcraft is an empowered introduction to the history and practice of politically-motivated magic.

From the politically charged origins of the word "witch" to the present-day magical resistance, this bold handbook explores the role of witchcraft in our modern world. Author, activist, and practicing witch Sarah Lyons takes readers on a journey through a leftist history of magic -- from the witch hunts of early modern England, through the Salem Witch Trials, and up to our present moment. Pairing mystical acts, including sigil magic and soul flight, with core organizing tactics, like power mapping and protests, Revolutionary Witchcraft offers a blueprint for building a politically grounded magical praxis.
From social justice to environmental activism, this radical reimagining of political activism addresses today's most pressing problems with empowering, inclusive rituals and magical actions. Each chapter introduces a key concept, like dreaming big, experiencing magical initiation, and joining the revolution, supported by a galvanizing historical case study on the power of mystical action. Full of actionable ideas for magical organizing, and an appendix packed with customizable spells, Revolutionary Witchcraft is the perfect companion for the magical uprising.